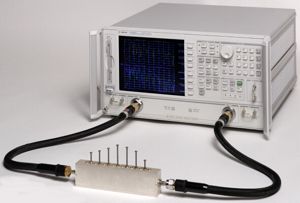 The Agilent/HP 8719ES S-Parameter vector network analyzer is an instrument which measures the complex transmission and reflection characteristics of two port devices in the frequency domain.

The 8719ES does this by sampling the incident signal, separating the transmitted and reflected waves, and then performing ratios that are directly related to the reflection and transmission coefficients of the two port.

Frequency is swept to rapidly obtain amplitude and phase information over a band of frequencies of interest.

The 8719ES Network Analyzer utilizes synthesized frequency sources to provide a known test stimulus that can sweep across a range of frequencies or power levels.

The 8719ES also can perform ratioed measurements (including phase), which require multiple receivers.

The 8719ES can provide a wealth of knowledge about a device under test (DUT), including its magnitude, phase, and group-delay response.

Test sequences can be stored internally in RAM, to an internal or external disk drive, or loaded from a computer over the GPIB interface. Sequence 6 is saved in nonvolatile storage and can be used as an autostart routine when titled AUTO.

Option 007 with the 8719ES replaces the standard solid-state transfer switch with a mechanical switch to provide higher output power. Option 085 adds internally controlled 0 to 55 dB step attenuators (5 dB steps) in the receiver path of both ports, an RF loop that allows the addition of an amplifier before the transfer switch, and RF loops after the switch that allow insertion of isolators, required for measurements above 1 watt.

Option 089 allows direct conversion loss measurement of mixers without need for a reference mixer. RF and IF frequencies must be within the specified operating range of the instrument. This test set modification adds an internal reference channel switch and deletes the reference channel output.